Today I will show you a Minecraft command block tutorial for making speed boots. These will make you run very fast when you put them on!*

Before you begin, make sure you are in creative mode and have cheats turned on.  Also, to avoid having a lot of annoying spam flying by in chat, type: /gamerule commandBlockOutput false and hit enter.

Make sure that the arrows on the side of the command block are face-up. This is very important.  You can make it face up by looking straight down when you place it.

After you do this, you need to right-click the command block and change its properties, as shown in the picture. 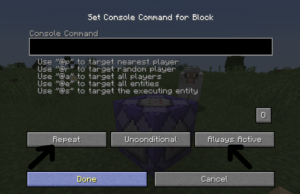 Now right-click the command block again, and where it says console command, type: /scoreboard players set @a Armor 1 {Inventory:[{Slot:100b,tag:{display:{Name:”Speed Boots”}}}]}. Earlier when you changed the properties of the command block you told it to always repeat, continuously, 20 times a second, without stopping. This command tells it to set a player’s score of Armor, the scoreboard objective you made earlier, to one only if that player is wearing boots named Speed Boots. And this goes for all players so whenever they wear these boots, their score of Armor is 1. Everyone has their own score of Armor, so if they wear the speed boots, their score will be one but not for another player who is not wearing them. Click done.

Next, you will place another command block on top of the first one. When you place it down, be sure to hold down shift because if you don’t you will simply enter the command block console. 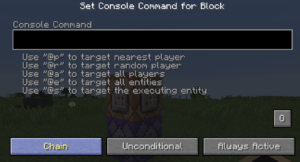 When you right-click the command block, click needs redstone once, but this time, instead of clicking impulse twice, click it once or until it says Chain. After you click done, the command block should turn green.

The last thing we need to program is to set the score of Armor for all players back to 0. If we don’t do this, we will never stop being fast even if we take the boots off! So put one last command block on top of the last one, holding shift as you do so. This command block is the same as the last one. Click on needs redstone once so that it changes to Always Active, and Impulse once so that it changes to Chain.

The command you should enter in that one is: /scoreboard players set @a Armor 0. This Tells the command block that after the other two commands are activated, set everyone’s Armor score to 0. Now you are done with that part.

The way the command blocks work together is like this:

The last thing you need to do is to get some boots (I prefer gold ones, but any kind is okay.) And rename them to Speed Boots, which is what you said the name of the boots that the player has to be wearing is.^ You can rename these boots with an anvil.

And you are done! Just wear the boots and you will be super fast, take them off and you will go back to normal.

^You can change Speed Boots in the first command to anything, like a password so not just any player can get them.

~You will have to have cheats on to do this and you will need to be in creative mode to place command blocks.